Netflix has teamed up with Curious Films for John McAfee’s feature-length documentary ‘Running With The Devil: The Wild World of John McAfee’, which will provide exclusive never-before-seen footage of the eccentric software pioneer as he goes on the run after the murder of his neighbour. And you can watch the first trailer for the documentary right now in the player above.

McAfee invented one of the most successful and frustrating software in the history of computing: McAfee Anti-Virus. At its peak, it was worth $100 million. But when his neighbor was murdered, he cashed in his fortune and fled – and invited a film crew with him. Claiming he was on the run for his life, McAfee fled to the jungles of Belize with guns, drugs and alcohol to create a new life for himself.

“‘Running With The Devil: The Wild World of John McAfee’ is a story that spanned over 10 years, it’s a story stranger than fiction like no other, about a powerful man who lived his real life as if she were a high-octane Hollywood movie – and the consequences that has for her loved ones. We are incredibly proud to tell this extraordinary story for the first time for Netflix,” said Dov Freedman, co- founder of Curious Films.

With access to exclusive footage as McAfee crosses international borders, the producers present “Running With The Devil” as the “definitive story” of a “larger than life” character who ran for president of the United States (in 2016 and again in 2020), escaped from prison, and claimed to have hacked the world.

“I haven’t found a human being who didn’t have a secret,” McAfee says in voiceover in the documentary’s trailer.

McAfee was arrested in Spain in 2020 for US tax evasion. In 2021, he was found dead in his prison cell at the age of 75. A 2016 documentary, “Gringo: The Dangerous Life of John McAfee,” previously explored his story, although he was not in the film.

Charlie Russell directs “Running With The Devil”, which is produced by Freedman.

The Netflix documentary is set to premiere on August 24. 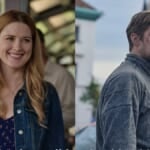